The northern sections of the tunnel have been installed and work is progressing.  As weather permits, the new structure will be backfilled.  The Township is anticipating a completion of the project in early to mid summer 2021.

Rapid growth in Cranberry’s population and economy have led to a corresponding growth in traffic. To keep that traffic moving safely, our comprehensive plan, adopted in 2009, prioritized a series of projects to create a community with high-quality traffic management systems including dedicated turning lanes, adaptive traffic signals, parallel local roads, well-aligned intersections, and rapid response to incidents.Traffic levels associated with different land use zones are matched to transportation investment, frequently in partnership with developers and other government agencies. In addition, the Township is extending its pedestrian network and working with county agencies as well as private transportation companies to establish public transit service between Cranberry and key destinations throughout the region. 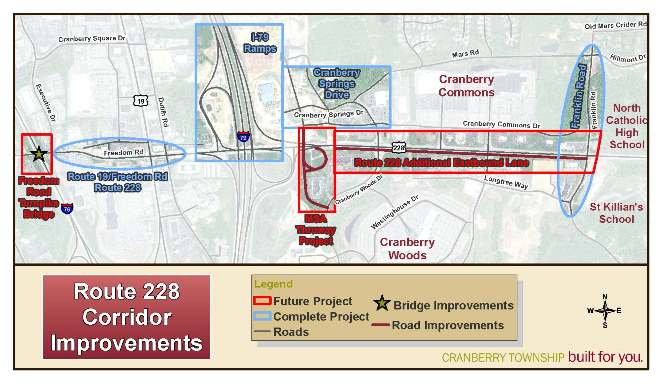 This re-timing involves traffic signals at 34 intersections in the multi-municipal system and the sequence of signals at eight of these intersections, spanning Cranberry, Marshall and Adams Townships and the Borough of Seven Fields.

Traffic signals include Rt. 19, from Thorn Hill Road to Rowan Road; Route 228 from Rt. 19 to Heritage Creek; and Freedom Road from Powell Road to Route 19. Rochester Road from Haine School Road to Rt. 19 were retimed by the Township.

These traffic signals are operated by a Traffic Operations Center (TOC), a flexible, state-of-the-art facility using signal management software to control traffic within and adjacent to Cranberry. The signals are part of a centrally based system communicating through a fiber optic network with remote observation cameras and are capable of seamlessly implementing the recommendations of the study’s findings. Learn more about the TOC

Thanks to the SPC and their consultant, Whitman, Requardt and Associates in Seven Fields, as well as our neighboring municipalities, and PennDOT, for their continued efforts to provide the most efficient traffic signal timing plans for our communities. Cranberry Township was cited in the award winning study by Traffic 21 at CMU.  Additional funding has been awarded to Cranberry in the form of ARLE Grants to begin implementing adaptive signal technology on Freedom Road and Route 228 and a Green Light-GO Grant to prepare emergency closure contingency plans for the system.

As part of the final phase of the Freedom Road Improvement Project, a new and improved traffic signal was activated at the intersection of Route 19 / Route 228 / Freedom Road.

This major crossroad in Cranberry Township handles up to 120,000 vehicles in an average day and was upgraded to include dual lefts, dual throughs, and a right turn lane in each direction. This allows the signal timing to be optimized with concurrent eastbound and westbound movement on Freedom Road and Route 228.

East and westbound advance dual left turns now occur simultaneously on Route 228 and Freedom Road, followed by east and westbound through movements. This change in the current signal operation made the intersection operate more efficiently. This $3,629,616 intersection improvement project was constructed by S.E.T. Inc. and managed by PennDOT.

Previously, westbound drivers on 228 wishing to enter I-79 in either direction turned left across traffic to get onto the Interstate’s on-ramps. Traffic flow was significantly improved with the opening of new ramps on the northern side of 228, linking it to the Interstate. The result: more green time for thru traffic.

Traffic exiting MSA’s Cranberry Woods Business Park onto Rt. 228 previously used three lanes – one right turn for eastbound traffic, one left only, and one combined left and straight lane. However, a straight-ahead lane was lacking. With the completion of the Cranberry Crossroads project on the north side of 228, Cranberry Springs Drive opened, across from Cranberry Woods Drive, continues north to Mars Road.

As the I-79 ramps project nears completion, the final phase of the Cranberry Woods/Cranberry Springs project – the third left turn lane out of Cranberry Woods Drive - has been completed.

Northbound traffic along Franklin Road at its intersection with Rt. 228 will soon have a dedicated left turn lane, mirroring the road’s pattern on the opposite side of the highway. That will enable the traffic light there to signal protected left turns onto 228 for Franklin Rd. travelers going both directions. The proposed Cardinal Wuerl North Catholic High School, which is building its new campus on the northeast corner of that intersection, will have its own access point on Franklin, north of its intersection with 228. The school project would also create a connector road, Hillmont Drive, at the Mars Rd. and Franklin Rd. intersection. The existing intersection of Franklin and Old Mars Crider Roads will be converted to a right in/ right out design.